Kim Kardashian is doing some deep thinking and even deeper feeling. On November 18, she shared a quote from Manifest Now author Idil Ahmed on her Instagram Story that implies she’s going through a tough time, but is sure she will triumph in the end.

“One thing I realized is that everything always ends up working out,” The Kardashians star wrote. “Sometimes even better than you can imagine. Remember this when you feel like you’re in a hard place or you feel like you’re being challenged the most. Believe in where you’re headed. See the bigger picture.”

The SKIMS founder could have been referring to anything when she connected with the idea of a “hard place,” but the post coincided with the reveal her ex-boyfriend Pete Davidson is dating model Emily Ratajkowski. Kardashian and Davidson broke up earlier this year after nine months of dating due to distance and busy schedules that proved too difficult to work around.

The former Saturday Night Live star was seen in New York City with the model, and she reportedly joined him at his apartment on November 16 on his birthday. The pair have supposedly known one another for awhile, but never connected romantically before. Like Kardashian, Ratajkowski recently went through a divorce and is enjoying her new freedom. A source told E! News that the two have “gone on a few dates” after “Pete texted Emily wanting to get together to catch up.”

Kardashian and Ratajkowski also know one another, though it’s unclear if they are more than casual acquaintances. They have been photographed together at various events, like the the Balmain runway show during Paris Fashion Week in 2015, and at the Vanity Fair‘s 2022 Oscars after-party this past March. 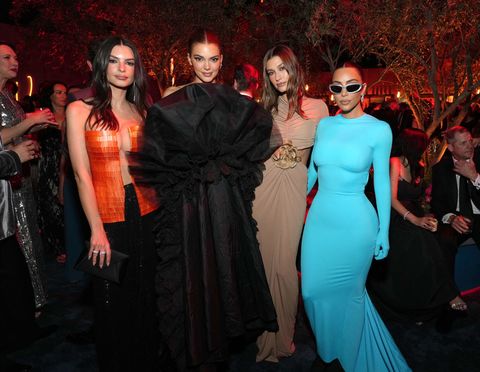 There is no saying that Kardashian is upset about Davidson moving on, however. The mega-influencer has had her share of difficult moments over the past few years following her divorce from Kanye West, who has made many private moments with her and their four children very public. The comedian may be far down the list of issues for her to contend with at the moment.

Aimée Lutkin is the weekend editor at ELLE.com. Her writing has appeared in Jezebel, Glamour, Marie Claire and more. Her first book, The Lonely Hunter, will be released by Dial Press in February 2022.

Glennon Doyle on Her Little-Known First Book and the Habit That ‘Saves’ Her Every Day
Kate Middleton Wore a Rented Green Gown and Princess Diana’s Jewels to the 2022 Earthshot Prize Awards
All About Darius Jackson, Keke Palmer’s Boyfriend and Father-to-Be of Her Child
15 Best Shirt Jackets for Men: Shackets for Surviving Every Season 2022
These Beauty Gift Sets Make the Ultimate Last-Minute Holiday Gift