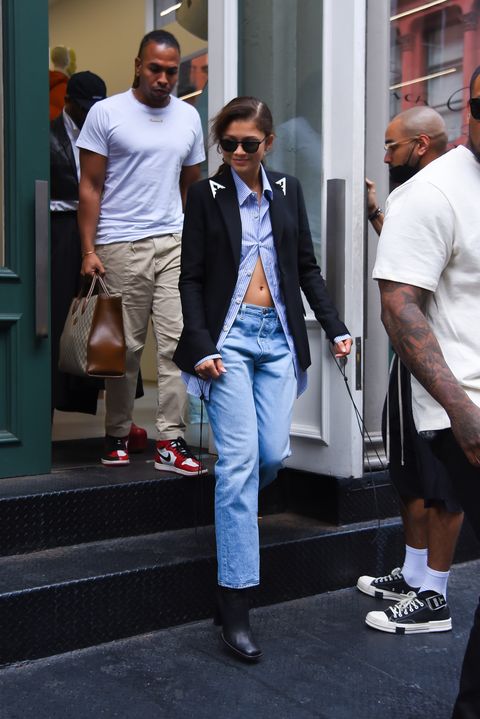 On Saturday, Zendaya continued to enjoy her trip to New York City, going on a shopping trip through Soho’s Acne Studios store in a stylish ensemble that flashed a peek of her abs through the open half of her button down. The actress paired the blue-and-white striped shirt with a dark navy blazer fitted with silver collar details and a pair of loose faded jeans.

She had her hair swept back in a low pony tail with some curls around her face, and accessorized with sunglasses, diamond earrings, and wore a pair of high-heeled black boots.

The 26-year-old just celebrated her birthday in NYC with her boyfriend Tom Holland, her Euphoria co-star Hunter Shafer, and her mother Claire Stoermer. The day after her birthday dinner at MAMO Italian restaurant, she and Holland walked with Stoermer around the city streets enjoying a cup of coffee.

Zendaya and Holland met while working on the first Spider-Man movie starring the actor for the Marvel Cinematic Universe, Spider-Man: Homecoming. Producers on set noticed right away that the pair had chemistry and a quick friendship, and they were apparently warned by producer Amy Pascal to not start dating as it could potentially make work difficult.

“I took Tom and Zendaya aside, separately, when we first cast them,” Pascal told the New York Times. “And gave them a lecture: ‘Don’t go there—just don’t. Try not to.’”

She added, “It can just complicate things, you know? And they… ignored me.”

The couple kept their relationship a secret for some time, but were eventually photographed kissing at a stop light in Los Angeles. Since then, they have become increasingly more open about their romance, and have posted about one another on social media. But lately Holland has taken a step back from Instagram and Twitter for his mental health, so many of their moments are back to being much more private.

Aimée Lutkin is the weekend editor at ELLE.com. Her writing has appeared in Jezebel, Glamour, Marie Claire and more. Her first book, The Lonely Hunter, will be released by Dial Press in February 2022.

Kate Middleton and Meghan Markle Reportedly Didn’t Talk to Each Other at All During the Queen’s Funeral Events
Rihanna Wears Mini Dress With Thigh High Boots On NYC Night Out
How to Style Black Tights For Any Occasion, From the Office to the Gym
Will Ferrell & Julia Louis-Dreyfus Take a Lie Detector Test | Vanity Fair
11 of Our Favorite Picks From Outdoor Voices’s OV Outdoors Fall Collection