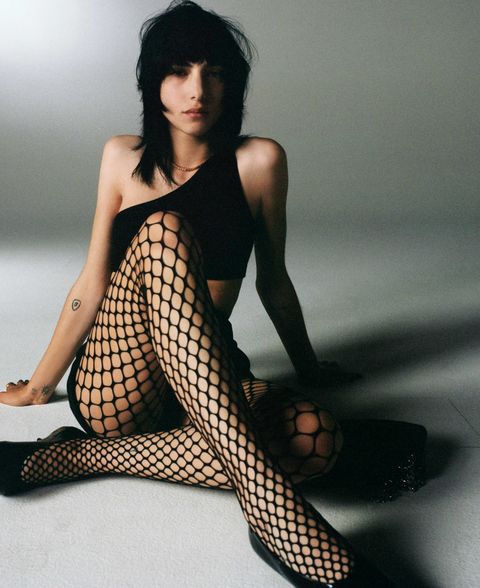 There’s a prickly kind of thrill to having coffee with someone who is teetering between anonymity and fame—something about the mix of caffeine and clairvoyance makes even the most jaded culture journalist remember why she started doing this in the first place.

I can tell the waiter at this hip TriBeCa hotel café knows the feeling, as he shakily places a mug of black coffee in front of Devon Ross, a clean-faced beauty with a raven-colored ’70s shag cut. On the morning in question, we are a few days away from the Cannes premiere of Irma Vep—the HBO limited series in which the 22-year-old model makes her acting debut—where she oozed Old Hollywood glamour and Gen Z je ne sais quoi in a cream silk Celine gown and pearl-dotted finger waves. Still, I get the sense our waiter knows she is someone he should be able to recognize.

Similarly, Ross’s black sweater bears the face of a woman who looks familiar, but I can’t seem to place. “It’s my boyfriend’s mom,” she says—Susie Cave, cofounder of the clothing brand The Vampire’s Wife; spouse to musician Nick Cave; and mother to Ross’s partner, the actor Earl Cave. Ross met Earl while shooting a 2020 Disney x Gucci campaign.

“We didn’t really talk that day,” she says with a smile. “We were both very shy, I was on the clock, and it was, like, 4 a.m. backstage at Disneyland. I got to see Chewbacca with his mask off, smoking a cigarette!” She laughs, recalling having been scolded by Disney staff for trying to FaceTime with a friend, and quickly regrets telling me the Chewbacca story, pleading into my recorder, “Don’t come for me, Disney!” 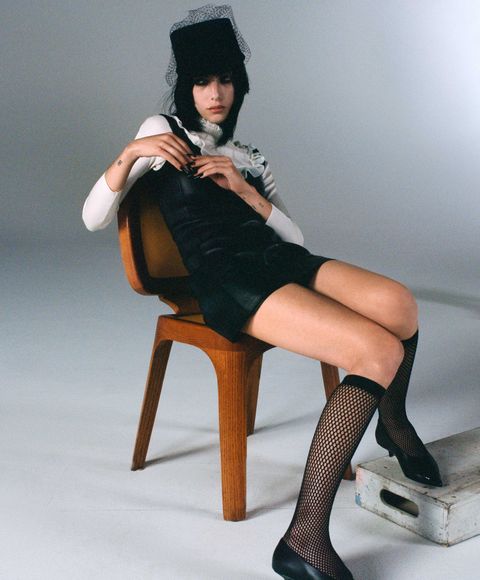 Ross became aware of the Irma Vep project through her modeling agents, and submitted an audition tape. “I’d never done a tape in my life. I only know what one is because my boyfriend’s an actor,” she says. “I was outside my doctor’s office when they offered me the role. I was like, ‘What? Are you joking?’ ”

By now, our waiter has likely heard of writer-director Olivier Assayas’s series about the remake of a French silent film (Les Vampires), which itself is an updated remake of Assayas’s 1996 film, also called Irma Vep (the name of the lead character in Les Vampires and an anagram of “vampire”). It’s funny and smart and meta—the kind of project about a project that might inspire a magazine writer to open a celebrity profile with some celebrity profile sausage-making tidbit. It’s also the kind of project one expects from Assayas, who began his career as a critic for the influential French film magazine Cahiers du Cinéma. Ross met Assayas right before filming began, and the two hit it off. “He’s the coolest guy,” she says. “He was in London in the ’70s, which is my dream. I was like, ‘Tell me everything!’ ” 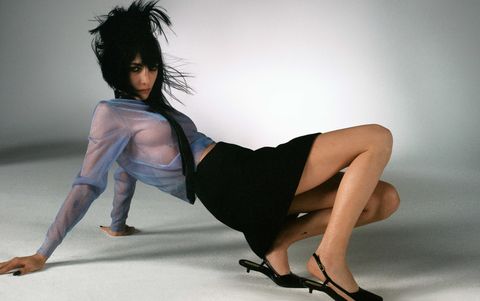 Watching Ross’s tape, Assayas felt stunned. “I could not believe my eyes,” he says. He hadn’t met with anyone for the role of Regina, an aspiring filmmaker and assistant to Mira (Alicia Vikander), an American movie star flown to Paris to play Irma Vep, and he told his casting director to stop searching. “I loved everything about her. She just magnetizes the camera and has this mysterious, profound beauty that you don’t bump into that often.”

Full of tongue-in-cheek nods to the self- seriousness of cinema, as well as the cringey waltzes directors dance with wealthy gatekeepers so their films can see the light of a projector, the series also hints at modern film-world-isms, like streaming algorithms and intimacy coordinators. “When you are a filmmaker and you write a story about filmmaking, you are every single character in a way,” Assayas says. “And part of the fun of the series is, I’m making fun of myself. But in the case of Devon, there was something special about her character, which I was not making fun of. When you are a young, budding artist, you do not have an ironic view—you are dead serious. And I wanted to respect that seriousness.” 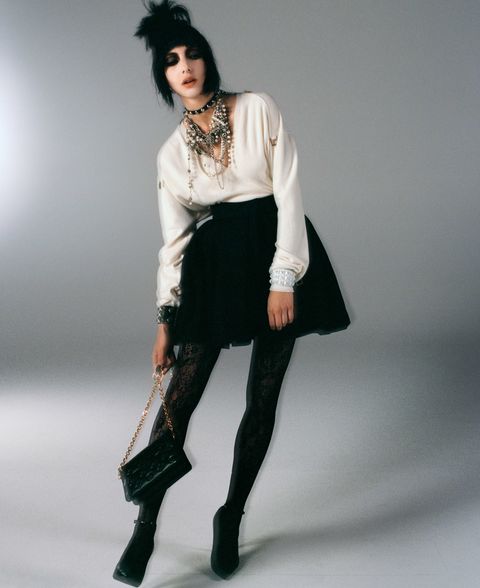 Joining a cast of seasoned actors as a novice was intimidating, but Ross never felt like a first-timer. “I didn’t want anyone to, like, look out for me. I wanted to learn by doing it,” she says. “Most of my scenes were with Alicia, so I just watched her and slowly learned the terminology.” By design, there is a naturalness to all the performances—Vikander’s character slips between Mira and Irma, and to some extent, Alicia, whether the tape is rolling or not. Assayas saw a similar authenticity in Ross. “I was kind of playing with fire,” he says of hiring someone who had never acted before. “But she has a great instinct, and what she did was way beyond my expectations.”

Born in Toronto to Craig Ross, lead guitarist for Lenny Kravitz, and Anna Bauer, a former model, Ross spent her summers on the road with her dad. Before fans showed up, she and her sister, Mia, would zip through the empty stadiums on their scooters. “We’d go to wardrobe and ask if they needed help sewing,” she says. “We’d just try to be little helpers, and then I’d fall asleep in my dad’s guitar case.”

“It was just no after no after no, but I never really got discouraged. I’d be like, ‘Whatever, you guys are crazy. You’re gonna really regret this someday!’”

A few years after her parents separated, Ross moved to L.A. to live with her dad. But she knew early on that she wanted to follow in her mother’s footsteps, career-wise. At 5-foot-7-ish, she was turned down by several modeling agencies. “It was just no after no after no,” she says. “But I never really got discouraged. I’ve always taken rejection pretty well. I’d be like, ‘Whatever, you guys are crazy. You’re gonna really regret this someday!’ ” She eventually caught the attention of Gucci’s Alessandro Michele, and from that point, her career took off.

Ross began homeschooling, then dropped out in 11th grade, because, she says, “I just really wanted to be a grown-up.” During a rebellious period in her teens spent with her mom in Toronto, Ross recalls making frequent trips to New York to stay with Zoë Kravitz, whom she calls her “godsister” (Lenny is her godfather). More recently, the two appeared in a YSL Beauty campaign. 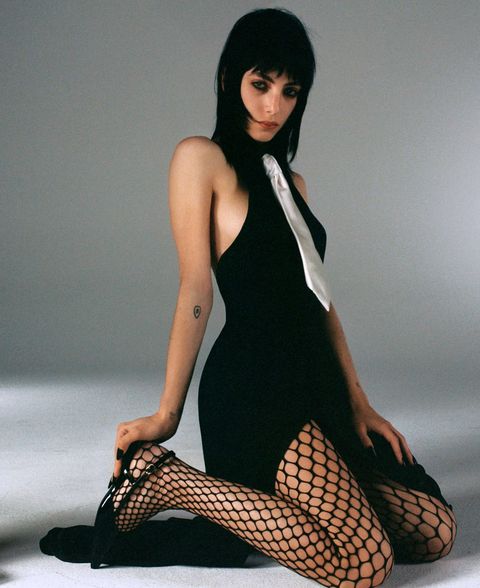 Another youthful rebellion involved declaring an anti-guitar stance. Despite her protestations, she says, “I’ve always kind of had a knack for it.” Ross spent the early part of the pandemic with her father in L.A. To allay boredom, they played music together and posted the videos to Instagram. “I’d make him play rhythm, and I’d play lead, which is so funny, but he’s my favorite person to jam with,” Ross says. These days, she splits her time between L.A. and London. After wrapping Irma Vep, she cowrote songs and played guitar on her friend Camille Jansen’s upcoming solo record. Soon, Ross will turn her focus to her own music: “I’m definitely starting a band when I get back to London.” 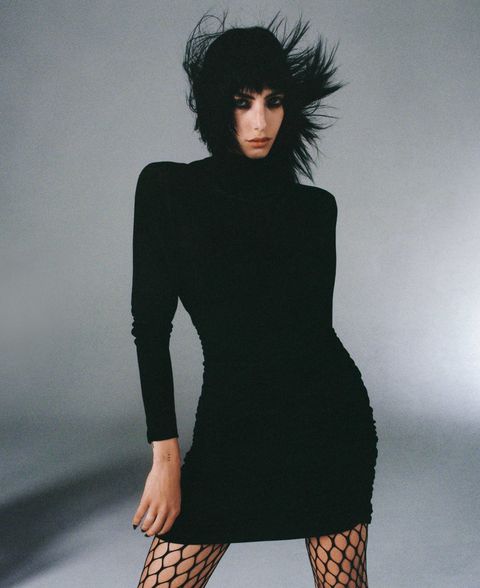 Hair by Shay Ashual and makeup by Mark Carrasquillo, both at R3-MGMT; manicure by Aki Hirayama at Tracey Mattingly Agency; produced by Drita Curanaj at 1972 Agency.

This article appears in the September 2022 issue of ELLE.

Melissa Giannini is the features director of ELLE.