What do Robert De Niro, Sylvester Stallone and Al Pacino have in common? Sure, there’s the superior acting pedigree. And yes, they’re all identifiable by surname alone. But more than that, they are known for being unquestionably badass. Why? Well, it’s easy to look badass in a field jacket.

Whether it’s Travis Bickle in Taxi Driver, John Rambo in First Blood or the eponymous undercover cop in Serpico, all three turned to the stone cold menswear classic whenever they wanted to suggest something of a counter-cultural status. And for good reason.

Part of the golden trio of outerwear pieces with obvious military origins – alongside the bomber jacket and the flight jacket – the field jacket has been endlessly re-interpreted since leaving active duty. Eminently functional, as service pieces had to be, the M65 also managed, crucially, to transcend its origins, allowing men to wear it without also slipping into Action Man territory.

It’s hardly surprising, then, that it has – in some variation or other – featured in collections from just about every menswear designer in recent seasons, from Dior to Tom Ford, via streetwear brands the likes of Stussy and Supreme; in every colour and fabric too, from navy wool-cashmere to raw state ecru cotton.

Need more convincing to make this the season to invest? Here’s everything you need to know about the most underrated piece of military menswear, from how it came to be to the best brands to buy from today. And yes, we’re talkin’ to you.

What Is A Field Jacket?

Designed in the 1940s for military purposes, the field jacket is a light to medium weight garment identifiable by its four front bellows pockets. These were intended to aid soldiers in carrying equipment without the need for an obtrusive bag.

Traditionally, the hip-length jacket often, but not always, had epaulettes and a belt or drawstring, which gathered the garment at the waist to both aid heat retention and also help prevent it getting caught on undergrowth. The fact that it flatters your silhouette probably wasn’t especially important to generals.

A similarly utilitarian idea lay behind the military’s decision to upgrade the benchmark design, replacing a button fastening with a zip, and button pocket fastenings with snaps closures a few years later. Invariably, given the military style of the design, the field jacket came almost exclusively in fabrics the likes of cotton drill, sateen or a nylon-cotton blend – suitably hard-wearing but also neither too warm nor too cool.

The World War II field jacket was the first expression of an ingenious new approach to outfitting soldiers that has shaped clever dressing ever since: the idea of layering up or down according to the climate. The field jacket was light enough to be worn on warmer days over thin layers, loose enough to fit over, for example, down or pile liners when the weather turned nasty. “The field jacket is a timeless style, as relevant today as when it was first designed,” says Bosse Myr, head of menswear buying for Selfridges. “It’s essentially a utilitarian design, and yet it works as well dressed up over a shirt and tie as it does dressed down with jeans and plimsolls.”

It’s clear that what has allowed the field to survive is its versatility. That and the fact it still looks just as cool as the day it was issued. “Of course,” adds Nick Gunn, the co-founder of vintage menswear dealers The Vintage Showroom, “the appeal of the field jacket probably also comes from the fact that it’s appeared in so many war movies. It’s a very masculine jacket, and for that reason most men look half decent wearing one. It’s remarkable how relevant the design has remained – a waxed biker jacket is essentially a field jacket design, after all.” The field jacket was required to handle conditions of war, and as such was designed with layering in mind. In summer it works as a showerproof layer over just a T-shirt; for the winter wear it over a down vest or a denim jacket. One of the most redeeming features of the field jacket is that it can be worn in a variety of different ways, with the overall effect changed with a simple styling tweak. “Designers like to balance out the pockets by putting a print on the back,” says Myr. “Pushing the sleeves up also looks good, and I’ve known some people cut the arms off, so it looks more like a vest.” Dress It Up Or Down

Like a lot of cool jackets, this one also works effortlessly with most of the pieces in the male wardrobe. Team a field jacket with jeans or chinos and plimsolls or chukka boots for a classic casual style, or sub one in for a blazer by throwing it over a shirt and tie. Always keep in mind suitability for the occasion: for work, a version in navy or charcoal wool or dark nylon will work better, as will a more modern style with a slimmer cut. Attempting to amp up the field jacket’s military associations is a big G.I. no. Instead, use accessories to tone them down. Deploy a bold patterned or polka dot scarf or neckerchief in a complementary or contrasting colour to instantly rise up the style ranks. Few things kill the lines of a carefully curated outfit like overstuffed pockets. To prevent distorting the shape of a field jacket, keep heavier items such as your wallet and phone in the lower pockets and lighter, slimmer ones (loose change, keys etc.) in the top pockets. And if that’s not enough, consider investing in a weekend bag. Field Notes On The Field Jacket

Know The Difference Between It And A Safari Jacket

Though many flex their fashion knowledge when it comes to the history of menswear, they often trip up when it comes to the field jacket, mistaking it with the safari jacket. “The real essence of a field jacket is that it’s utilitarian, ready for rough and tumble. It’s the Willys Jeep of jackets,” says Nick Ashley, creative director of Private White VC. “A safari jacket just isn’t. It’s more poncey. You need to dress it up.”

If you happen upon an early edition M65 with all the trimmings, don’t go carelessly ripping off badges and patches; this history is part of the jacket’s appeal, so revel in the fact you have a true one-off. Or just wait to find a jacket that’s free of the decoration that typically went with it.

Unless you want people to think you’re an extra from Saving Private Ryan, avoid wearing a field jacket in the classic olive tone with a pair of trousers in the same shade; or any trousers that are remotely military-inspired such as cargo trousers. As an easy entry, stick within the classic menswear colour palette of navy, charcoal, tan and black.

Don’t Shy Away From Linen

Military-grade cloth seems like the obvious choice when it comes to a jacket designed for the front line, but it isn’t the only option. “Very heavy linen has historically been used for hunting jackets because it’s tough but breathes well,” says Ashley. “People tend to associate linen with a middle-aged dad style. But they’re wrong.” For winter, consider moleskin, too.

A long-time producer of clothing for the US military, Alpha Industries still makes a military-grade M65 field jacket (even if the armed forces no longer cop the original). Modern examples are no less equipped for the battles of everyday life, built to be both water and wind resistant, with a button-in liner also available. 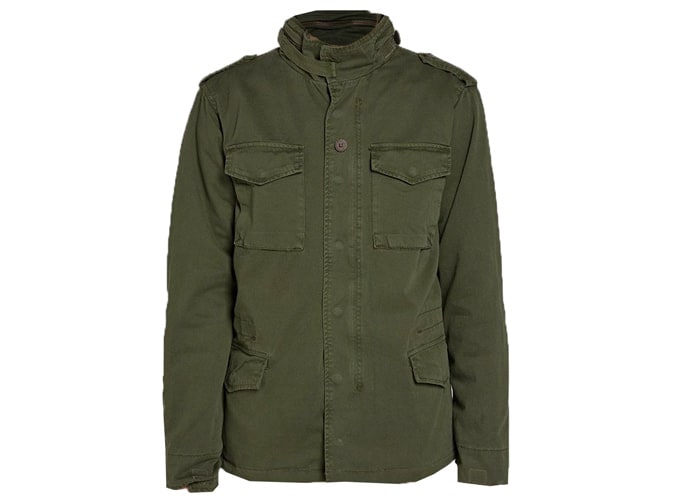 The British brand’s Roadmaster jacket is, effectively, a field jacket rendered in waxed cotton. Based on the outerwear maker’s legendary Trialmaster jacket worn by Steve McQueen, the four-pocket shape made the style perfect for bikers and those looking for a more rugged take on the design, if that was even possible. Founded by Milanese designer Alberto Aspesi in 1969, versions of the M65 from his eponymous label inevitably have a distinctly Italian feel. Slimmer in cut, but more upscale in materials, they’re often made from a garment dyed, high-density nylon taffeta shell, with a detachable hood. Bellissimo. US preppy fashion retailer J.Crew calls its take on the outerwear model a ‘field mechanic’ jacket, no doubt because of the extra details it has bolted on to the original design. Among them, a partial lining, broad wind flap and a pocket on the sleeve – presumably for your spanners. Such is the iconic nature of the field jacket that there’s a style for every pocket; and four pockets at that. Versions from Spanish fast fashion giant Mango are often made from a nylon-cotton blend and finished with a quilted inner lining and two internal pockets, making them light and light on the wallet. A History Of Service

The field jacket as we know it today was created in 1943 – dubbed the M-1943 or M43; this was the jacket that shaped the multi-pocketed, olive drab military look that would become instantly recognisable for decades to come. However, the idea for a hardy, multi-functional jacket went back almost a century before then.

The British Army’s efforts against the Boers of South Africa taught them not only that a khaki coloured fabric was more practical than one in bright red, but introduced the many-pocketed front – so useful in the new era of ammo-intensive repeating rifles – that would become the standard issue arrangement of British Army tunics for World War I.

The distinctive style really took shape during the next world war, though. The Office of the Quartermaster General – essentially those charged with coming up with and producing the US Army’s soldiering kit from military haircuts to clothing – set to work to replace it. They came up with a layering system that could be built up or down depending on the weather conditions and key to this was the M43, numbered after the year of its design. It didn’t see action until a year later, as part of the US Army Third Division’s invasion of Italy. Although the battles there would be among the bloodiest of the war, those soldiers lucky enough to be kitted out in the M43 field jacket gave it the thumbs up.

But that was far from the end of the field jacket’s story. The military introduced further small modifications – the use of zips and snaps on the M51 – before the classic that is the M65 came into being, replacing the revere collar with a stand collar, adding a concealed hood, and made in a more robust, mixed fibre fabric.

“[Today] it’s easy to forget what this great jacket design was actually created for, that it was part of the grim business of war,” says Gunn.