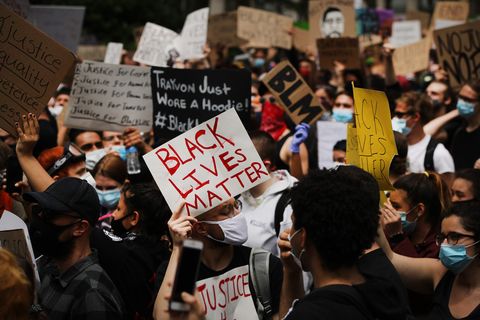 As anti-police brutality protests have broken out across the country after the murder of George Floyd in Minneapolis, more than 9,000 people have been arrested in connection to these demonstrations—a number that keeps growing every day. While the gatherings have been overwhelmingly peaceful, others have turned chaotic as police made arrests and deployed so-called “non-lethal” tactics like tear gas, pepper spray, and rubber bullets.

Almost immediately after people started taking to the streets, donations started rolling into bail funds like Minnesota Freedom Fund, the Peoples City Council Freedom Fund, and the Louisville Community Bail Fund, which serve to post bail for arrested protesters in their areas. Celebrities like Chrissy Teigen and John Legend, Harry Styles, Seth Rogen, Gabrielle Union, Lizzo, and dozens of others matched donations to ensure those arrested are able to get home.

For a quick primer on your rights as a protestor, here’s what the ACLU says:

Considering most of us don’t have a personal lawyer, it’s best to ensure you have easy access to legal services before you even attend a protest. Over the past week, supporters have compiled lists of attorneys offering free legal support across the country. You can contact them directly to confirm their availability. Consider writing their number on your arm before you head out to protest if you might be arrested.

Where To Find Pro Bono Lawyers

Most lawyers have been announcing their willingness to help via Twitter, so if you’re struggling to find representation in your area, try searching “pro bono + [YOUR STATE/CITY]” to find resources.

Lauren Puckett
Lauren Puckett is a writer and assistant for Hearst Magazines, where she covers culture and lifestyle.